Zohra Wahab Trading Company was originally founded and registered as a sole proprietary company on 6th May 1977 by a Husband & Wife Entrepreneur Team.

The company initially started off as an Import & Export Trading Medical Electronic Apparatus Company to take advantage of the ever-growing healthcare industry in Singapore.

They took into consideration of the long-term business survival into the Next Millennium 21st Century and underwent further transformation on 6th January 1995.

Zohra Wahab Trading Company is now a well-established medical apparatus marketing company and operates from its own office/warehouse facility at Aljunied Road since 1992.

Early 2009, the Company’s UKAS ISO Certification for Quality Management was upgraded and accredited under the latest ISO9001:2008 under UKAS and the Singapore Accreditation Council.

At the same time, the Company was able to obtain the accreditation for HSA TS-01: GDPMDS (Goods Distribution Practice for Medical Devices in Singapore) by the Singapore Accreditation Council.

We are now proud to assist in spearheading of the HSA TS-01:R2: 2010, GDPMDS credited in Singapore Medical Traders market.

The Limited Exempt Private Company is still in the business of import, export, wholesaler and stockist of medical equipment and have now expanded their operations to act as the distributor and agency for well trusted medical global companies for regional markets.

The company distributes wide range of medical items and stockist of:

The company, in consultation with a long-term Japanese business associate, a close friend of the founders, went ahead to establish an export/ buying office at Yokohama, Japan and it’s called ZOWACO JAPAN INC. The company is headed by Mr. Hector T. Noji – President.

We are growing and progressing every year with the assistance of our valued suppliers and with support of our customers locally as well as worldwide. 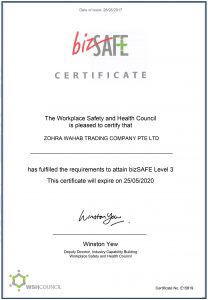 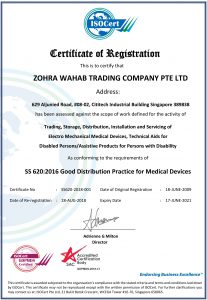 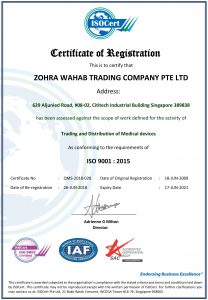